Mom and I were talking about her horse just now, and she came up with a joke instantaneously.  Our conversation went like this:

Mom: She just needed to put her big girl panties on and stop licking the ground.
Me: You just wanted to say the word 'panties'.
Mom: You know what they call them for horses?
Me: No.
Mom: Nickers.

Hahahaha!  Mom just came up with that on her own, and since I am on my computer, it is being immortalized on my blog.  Nice!
Posted by Lisa at 8:43 PM No comments:

This Is Really Happening . . .

I can't believe it, it is FINALLY here - my graduation application!!! 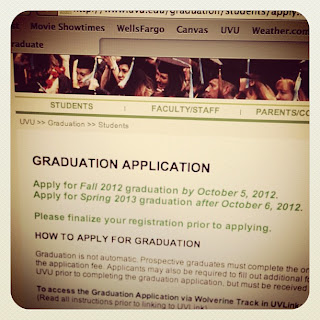 I have been thinking about filling this sucker out for 10 years.  And the time has come.  I get chills thinking about it!  Wahooooooooooo!
Posted by Lisa at 8:25 PM 1 comment:

Today was one of those Bing-Crosby-White-Christmas-Count-Your-Blessings days.  I have just been dealing with some *slightly* stressful things, and I'm in survival mode.  I'm looking for good things in my life, and I came up with several:

There are so many more, but I think that covers the basics.  Now these are in no particular order, so don't think I value a postcard more than I do the Gospel. :)

What are you thankful for?
Posted by Lisa at 9:01 PM No comments: 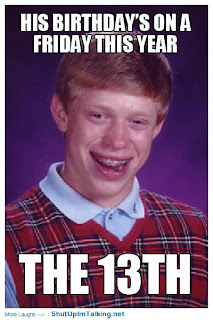 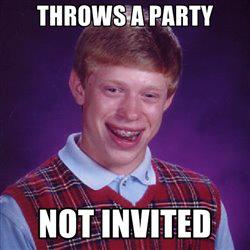 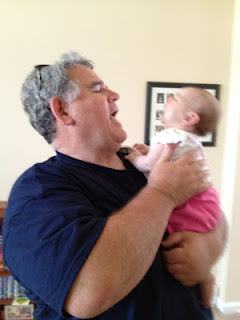 Happy birthday to the best father out there!  Dad, I hope you got my card, it gave me a little laugh when I picked it up.  I'm sure you will be consuming copious amounts of lemon meringue pie and having a delectable dinner with the fam.  Just know that I will be thinking of you, and being a *little* jealous that I'm not there.

I love you, Popsdiddy.
Posted by Lisa at 9:09 PM No comments:

Got this little gem from Sarah today.  Curt is such a good uncle!
Posted by Lisa at 2:27 PM No comments:

I got a text earlier today, and Mom told me that through a couple of different circumstances, she had gotten Hokey from Tim, the man who owns the barn where she keeps Abby.  Just after that first text, I got another one that said, "And actually, I was asking him thinking about YOU.  You just got a horse, sweetie.  Happy graduation!" 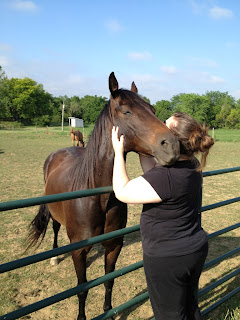 I met Hokey earlier this summer when I was out in Indiana visiting Mom and Dad.

I guess Mom really wants me to move out to Indiana when I'm done.  And boy, does she KNOW her audience!  Hokey was one of the horses the family rode when we went out to the barn at Christmas.  He is a big, docile sweetie, and Mom calls him a 'lap dog'.  If you are at a gate, Hokey is right there, wanting to be pet and loved.  The picture above is when I accidentally put him to sleep because I was rubbing his neck.

Hokey will stay at the barn with Abby, and Mom is going to take care of him.  If I do move out to Indiana when I graduate, at least I won't be bored!
Posted by Lisa at 2:02 PM 2 comments:

Joe's, Parade of Homes, & Troping With Jess, Andrew, and Vanessa!

So, Vanessa was in town to shoot a wedding, and Jessie and I got to steal her for all of Friday!  Jessie had some great ideas for what to do, and first on the list was a visit to Joe's Cafe.  That place is quickly becoming legendary in Orem, and a tradition for any member or friend of the Isenbarger family.  Vanessa's omelet was as big as her head.  I'm not kidding!  She couldn't finish it, so I took it home, and my roommate made two meals.  Out of the leftovers!

After breakfast we had a little break, and then headed out to the Utah Valley Parade of Homes.  It was my first time going, and I was just flabbergasted!  We only went to about 6 houses, but each of them were just amazing to go through.  We came to a consensus that the big things this year are sliding doors on tracks, slides going from one floor to the next, and teal accents.  This is the living room of Jessie's favorite house.  It was just beautiful!  Oh, and the house had a 'locker room' where the kids could change into their swimming suits before going out to the pool.  It had a shower, a towel and suit drying machine, and a bathroom.  It was crazy! 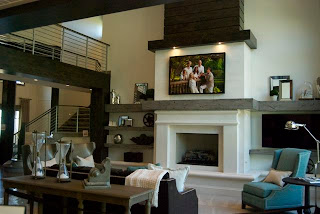 Here is a link to some photos of one of the fantastic homes!

This was actually my favorite house: 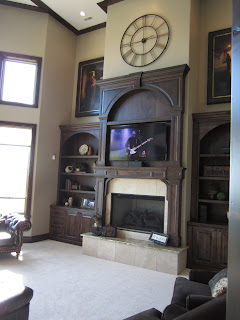 It was just so classic, and really nice.  My only complaint was that I felt the hallways were going here, there, and everywhere!  It was a little confusing.  But, it had a prep kitchen, a slide from the top floor to the basement, and lots of gorgeous woodwork.

My favorite 'extra'?  DEFINITELY this: 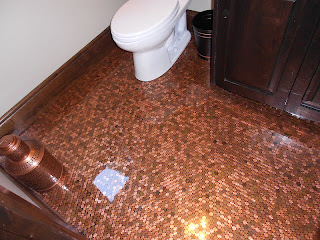 Yup.  That is a floor completely made out of pennies.  No, really! 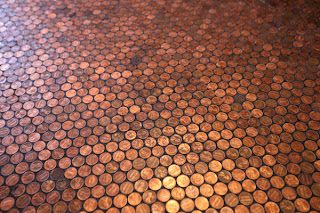 Well, there is something else that comes in a really close second . . . in the first house we went to, they had a door in their pantry that connected to their garage.  So when you come home with groceries, you open the door, shove the bags of groceries in, and then go inside to the pantry to organize.  Isn't that fabulous?!

The Parade of Homes took all afternoon, but we had time to grab a quick dinner, and then Jessie and Andrew took us down to Mona to do some troping.  I sat out, but Vanessa and Jessie both went off the ropes.  They did so well!  I would have been really nervous, but Vanessa got right up there and mastered that trope!

We also saw some kids who were fishing for crawdads.  They tied a bit of hot dog on a string, then let it drop to the bottom of the pond.  The crawdads would just grab on to the bait and not let go.  It was so neat!  There was a little kid (probably around 4) who was there with his sisters, and he was just having a blast telling us what to do and how to get the crawdads.  He was the cutest!  We also found a little next of sleeping field mice, and the little guy decided that they all should be called 'Pepper' because they were all gray.  Each and every one of them was named 'Pepper'.

Have you ever heard of Pleasant Grove's Strawberry Days?  It just happens to be the best darn rodeo in Utah! 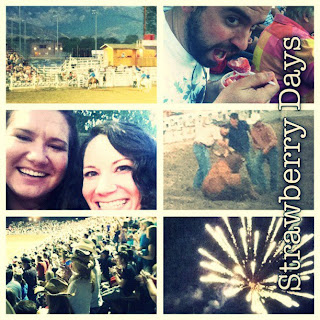 Andrew, Jessie, Amy, Chris, Marietta, Marshall, Colette, and I all met up at the PG fairgrounds for an evening of food and fun.  Have you ever seen Mutton Busting?  How about Wild Cow Milking or the Cash Cow?  Yeah, it's a lot of fun.

Mutton Busting is an event where kids get a chance to ride a sheep.  Yup.  It's bull riding for the young 'uns. The kids are outfitted with helmets and chest pads, plopped on the back of a sheep, and they try to stay on while the sheep runs around.  It is hilarious.  Sometimes, you even get a sheep that will jump or buck, and the poor kid usually just falls off.  Jessie informed Andrew that their children will have to do it, and I have to admit, that would be something I would like to see.

This kid is amazing!

Wild Cow Milking is when teams of three men have to chase a wild cow around the arena until they corner it, milk her, and run that cup of milk to the judges.  The first team with a full cup wins.  If you look closely at the middle picture on the right, you will see a cow laying down.  She didn't want to be milked, so she just lay down on the ground and wouldn't budge.  It reminded me of Sarah's strategy when Kyle tries to pick her up - she just falls to the ground.  I love it!

The Cash Cow is when kids chase around a cow (or more) that has had money stuck all over its body.  This year, because so many kids have wanted to participate, they had two live cows, and then a poor teenager dressed up as the Chick-Fil-A cow.  Well, the kids figured out pretty quickly that it would be easier to get the money off of the Chick-Fil-A cow, so they swarmed him!  He went down in the middle of a pack of kids, and stayed there until a cowboy ran to the rescue and picked him up and dusted him off.  I felt so badly for the person in the costume!

But the absolute BEST thing about Strawberry Days is the strawberries and cream.  For $1.50, you get a large cup of strawberries just swimming in fresh cream.  I look forward to it each year, and it NEVER disappoints! 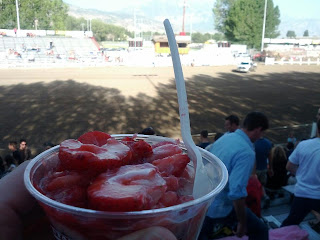 Until next year, Strawberry Days!
Posted by Lisa at 12:38 PM No comments:

Lisa
I'm a student at BYU studying elementary Education, and I have a few years to go before graduation. I love reading, meeting new people, cooking, movies, volleyball, piano, cleaning (yes, that's right!), and animals. Kind of random, I know.